What does Rolf mean?

[ 1 syll. rol(f), ro-lf ] The baby boy name Rolf is pronounced as RAOLF in German †. Rolf is used chiefly in English, German, and Scandinavian, and it is derived from Germanic origins. Hrolf (Germanic) and Hrólfr (Old Norse) are older forms of the name. Hrolf was used as a short form of Hrodwulf, the source for the name Rudolph. It was first introduced by Normans to English speakers, but it was soon superseded by Ralph and fell out of use. In the late 19th century, the name Rolf was re-introduced to English speakers as a German name.

Rolf is a variant of the name Ralph (English and German).

Variant forms share both the origin and meaning of Rolf.

Roffe (Scandinavian diminutive form) and Rolfe (English and Scandinavian spelling variant) are other forms of the name.

Rolf is an uncommon baby name for boys. At the modest height of its usage in 1934, 0.005% of baby boys were named Rolf. It ranked at #876 then. The baby name has since slipped in popularity, and is today of very light use. In 2018, within the group of boy names directly related to Rolf, Ralph was the most popular. 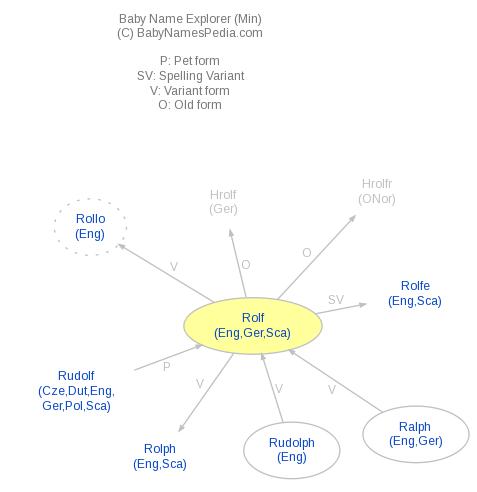