What does Rollo mean?

[ 2 syll. rol-lo, ro-llo ] The baby boy name Rollo is pronounced as ROWL-ow †. Rollo is used chiefly in English and it is derived from Germanic origins. The name Rollo was used as a Latinized form of Roul (Old French) during the medieval period. It was borne by an exiled Viking leader who became the first Duke of Normandy (860-932).

In addition, Rollo is a pet form of the name Roland (English, French, German, and Welsh) in the English language.

Rollo is also a variant of the name Rolf (English, German, and Scandinavian) in the English language.

Rollo is also a variant of the name Rudolph (English).

Roll, Rolla, and Rolo (English) are variants of Rollo.

Variant forms share the origin and meaning of Rollo.

Rollo is an uncommon baby name for boys. It is not listed within the top 1000 names. In 2018, among the group of boy names directly related to Rollo, Roland was the most popular. 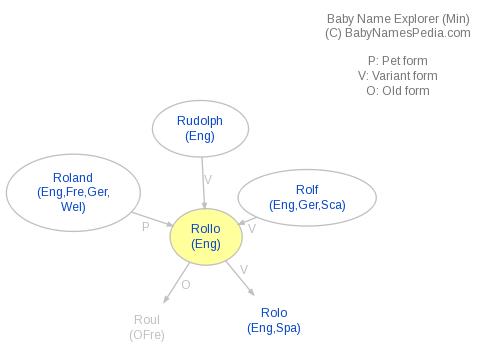