What does Roma mean?

[ 2 syll. ro-ma, rom-a ] The baby girl name Roma is also used, though less frequently, as a boy name. It is pronounced ROWMaa- †. Roma has its origins in the Latin language. It is used largely in English, Italian, and Romanian. The first name is derived from the name of the city Rome. In Roman mythology, Roma was a goddess that personified the Roman state; the emperor Hadrian built a temple in Rome dedicated to her. The name has been used by English speakers since the 19th century.

What are the Variant Forms of Roma?

Roma is uncommon as a baby girl name. At the modest height of its usage in 1911, 0.016% of baby girls were named Roma. It had a ranking of #495 then. The baby name has dropped out of favor since then, and is currently used only on a very light scale. In 2018, within the family of girl names directly related to Roma, Romina was the most frequently used. Roma has mainly been a baby girl name in the last century. There were 50% more baby girls than boys who were named Roma in 1903. 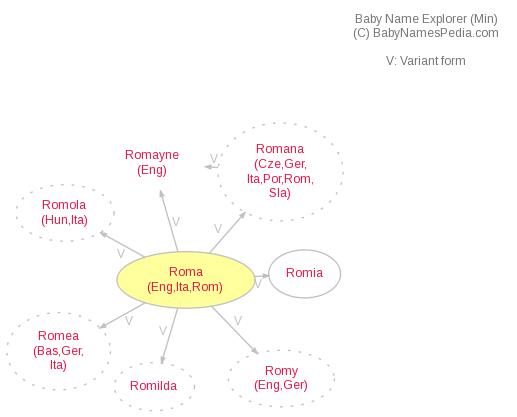