What does Roman mean?

[ 2 syll. ro-man, rom-an ] The baby boy name Roman is sometimes used as a girl name. Its pronunciation is RAO-MaaN (Polish) or Raa-MAAN (Russian) †. Roman is an Albanian, Czech, German, Polish, Romanian, Russian, and Slavic name of Latin origin. The name's meaning is man from Rome. It is derived from the element 'romanus' which means citizen of Rome. Romanus (Latin) is an old form of Roman. The name was borne by a number of early saints, including Saint Romanus of Caesarea (-304), who was martyred under Diocletian. The name Romana (Czech, German, Italian, Portuguese, Romanian, and Slavic) is the female equivalent of Roman.

Roman is popular as a baby name for boys, and it is also viewed as trendy. The name's popularity has been rising since the 1940s. At the modest peak of its usage in 2018, 0.226% of baby boys were given the name Roman. It ranked at #85 then. Out of all boy names in its group, Roman was the most popular in 2018. 4 times more boys were named Roman than the subsequent ranked name, Romeo, in that year. Roman has in the past century been mostly given to baby boys. 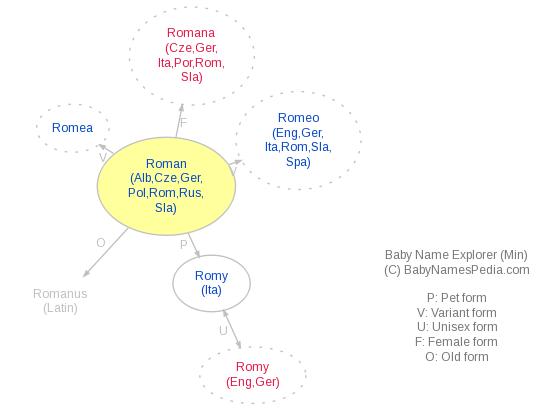