What does Romeo mean?

[ 3 syll. ro-meo, rom-eo ] The baby boy name Romeo is pronounced as RowMEY-ow- or ROWMiy-ow- †. Romeo is used predominantly in the English, German, Italian, Romanian, Slavic, and Spanish languages, and it is derived from Latin origins. It is from the element 'romaeus' meaning pilgrim to Rome. The first name is derived from Romaeus (Latin), which is itself a derivative of Roma. The name Romeo is famous from the Shakespeare tragedy play Romeo and Juliet (1595); Shakespeare derived the name from the Arthur Brooke narrative poem, The Tragical History of Romeus and Juliet (1562), which was itself based on the stories of the Italian novelist Matteo Bandello (1480-1562). The name gained public attention in recent years when it was given to the son of the English footballer David Beckham and his pop singer wife Victoria in 2002.

In addition, Romeo is a variant of Roman.

The name Romea (Basque, German, and Italian) is the female version of Romeo.

Romeo is a fairly popular baby name for boys. The name's popularity has been rising since the 1990s. At the recent peak of its usage in 2018, 0.051% of baby boys were given the name Romeo. Its ranking then was #340. In 2018, out of the group of boy names directly linked to Romeo, Roman was the most commonly used. Its use outnumbered Romeo's by 4 times in that year. 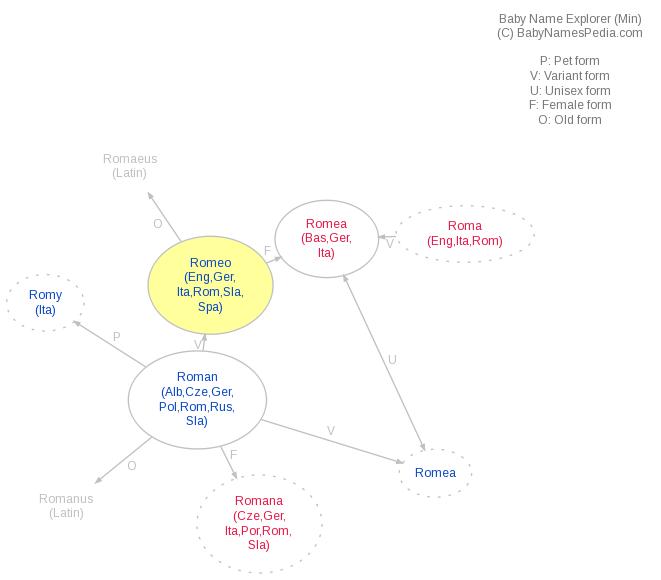