What does Ronna mean?

[ 2 syll. ron-na, ro-nna ] The baby girl name Ronna is pronounced as RAA-Naa- †. Ronna has its origins in the Welsh, Old Norse, and Old Greek languages. It is used largely in the English language.

Ronna is a form of the English and Welsh Rhonda.

Ronna is also a form of the English Ronalda.

Ronna is also an English diminutive of the English, Italian, Portuguese, Romanian, and Spanish Veronica.

Ronna is unusual as a baby girl name. Its usage peaked modestly in 1967 with 0.008% of baby girls being given the name Ronna. It had a ranking of #839 then. The baby name has experienced a drop in frequency since then, and is of only sporadic use now. In 2018, among the family of girl names directly linked to Ronna, Veronica was the most regularly used. 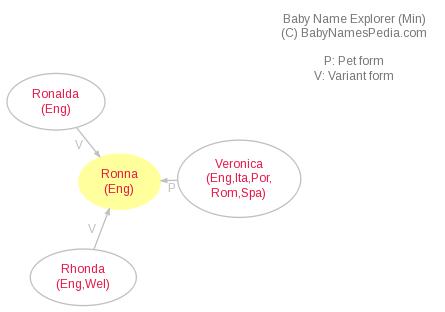