What does Rory mean?

[ 2 syll. ro-ry, ror-y ] The baby boy name Rory is also used, but less commonly, as a girl name. Its pronunciation is RAOR-iy- †. Rory is used predominantly in the English, Irish, and Scottish languages, and it is derived from Irish Gaelic, Germanic, and Celtic origins. From Celtic roots, its meaning is red king. It is derived from the elements 'ruadh' meaning red ; 'ri' king. The name is Anglicized from the traditional Irish Gaelic Ruaidhrí or the Scottish Gaelic Ruaraidh and Ruairidh. It is sometimes considered a form of Roger; in Scotland the name is sometimes used as a short form of Roderick. The name was popularized in Ireland during the Middle Ages by Rory O'Connor (-1198), the last High King of Ireland.

In addition, Rory is a pet form (English) of the name Riordan (Irish).

Rory is fairly popular as a baby name for boys, and it is also considered fairly trendy. The name's popularity has been rising since the 1940s; before that, it was of very modest use only. At the recent peak of its usage in 2018, 0.046% of baby boys were given the name Rory. Its ranking then was #368. Out of all boy names in its group, Rory was the most popular in 2018. Rory was twice as popular as the subsequent ranked name, Roger, in that year. There were times from 2008 to 2008 that the name Rory was given more often to girls, but it is more popular as a baby boy name today. In 2017, 53% more baby boys than girls were given the name Rory. 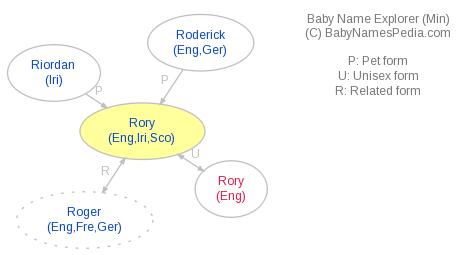