What does Rosa mean?

Rosa's language of origin is Latin. It is predominantly used in the Dutch, English, Italian, Portuguese, and Spanish languages. This is a Latinate form of Rose first used in the 19th century. It is this form that has been used to produce many other compound names such as Rosabel, Rosanna, Rosina, and so on.

Variant forms share the origin and thus the meaning of the name Rosa.

Rosa's origin is Bulgarian, and its use, Slavic. Here, the meaning is 'dew'.

Rosa is a variant form of the English and French Rose in the Dutch, English, German, Italian, Portuguese, Scandinavian, and Spanish languages.

Rosa is an all-time favorite. Today it is still a fairly popular baby name for girls, though it was in more widespread use previously. In 1900, 0.352% of baby girls were given the name Rosa. Its ranking then was #69. The baby name has since experienced a steep decline in frequency, and is of only occasional use in recent years. In 2018, it ranked at #641 with a usage of 0.025%. Within the group of girl names directly linked to Rosa, Rose was the most popular. Its use outnumbered Rosa's by 5 times in 2018. 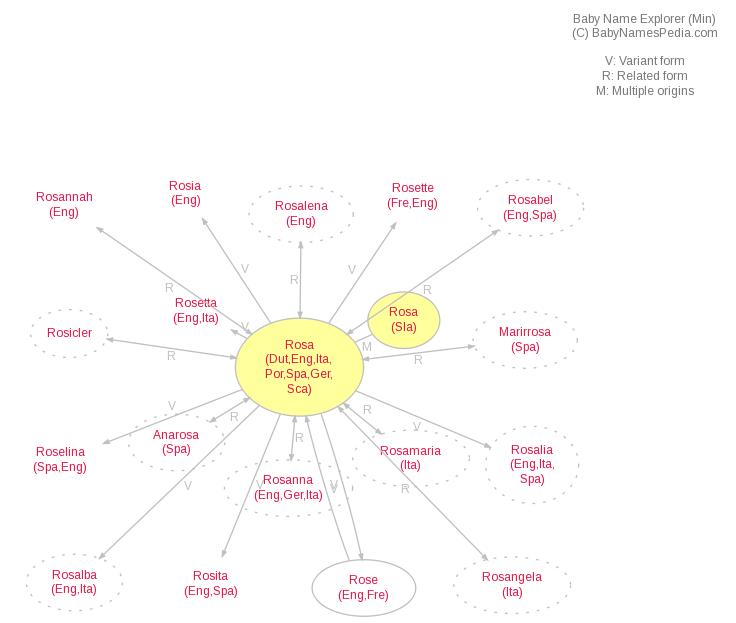