What does Rosaleen mean?

[ 4 syll. ro-sa-lee(n), ros-ale-en ] The baby girl name Rosaleen is pronounced ROWZaa-LiyiyN †. Rosaleen's language of origin is Germanic and it is predominantly used in the English language. The name developed from Rosalyn under the influence of the suffix '-een', which itself originated from the Irish Gaelic diminutive '-in'. The name was used as a translation of the Gaelic name Róisín by James Clarence Mangan in his poem Dark Rosaleen (1846); in the poem, Rosaleen is also an allegory of the Irish nation.

In addition, Rosaleen is a variant transcription of Rosalind (English).

Rosaleen is also a variant transcription of Rosalyn (English).

Variant forms inherit the origin and meaning of Rosaleen.

Rosaleen is an irregularly used baby girl name. It is not listed in the top 1000. In 2018, out of the family of girl names directly linked to Rosaleen, Rosalyn was the most widely used. 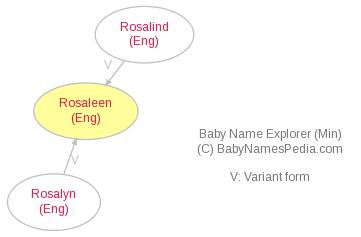