What does Rosalia mean?

[ 4 syll. ro-sa-lia, ros-al-ia ] The baby girl name Rosalia is pronounced as RowSaa-LIY-aa- or RowZEY-Liy-aa- †. Rosalia's language of origin is Latin and Germanic. It is predominantly used in English, Italian, and Spanish. Latin origin, English and Italian use: It is derived from the word rosa with the meaning 'rose'. Rosalia (Latin) is an original form of the name. The name was borne by Saint Rosalia, a 12th-century Sicilian virgin and patron of Palermo. The rosalia was also the name of a religious ceremony in which roses were placed on tombs in remembrance of the dead. The form Rosalie was introduced to English speakers in the late 19th century, and it gained popularity due to the vogue for flower names then. This form was also used by Oscar Wilde in his comedy Lady Windermere's Fan (1892). The name was later popularized by the Broadway play Rosalie (1928), which was also adapted as a musical film (1937).

In addition, Rosalia is a variation (English and Italian) of Rosa.

Rosalia is also a variation of Rosalind (English).

Rosalia is also a variation (English, Italian, and Spanish) of Rose (English and French).

Rosalía (Spanish), Rozalia (Polish), Rozalija (Latvian, Lithuanian, and Slavic), and Rozália (Hungarian) are variations of the name that are used in foreign languages. The familiar form Lia (Italian) is another foreign variant.

Rosalia is an unusual baby girl name. Its usage peaked in 1906 with 0.010% of baby girls being named Rosalia. It was #674 in rank then. The baby name has experienced a decline in popularity since then, and is currently of only very modest use. In 2018, among the family of girl names directly related to Rosalia, Rose was the most frequently used. 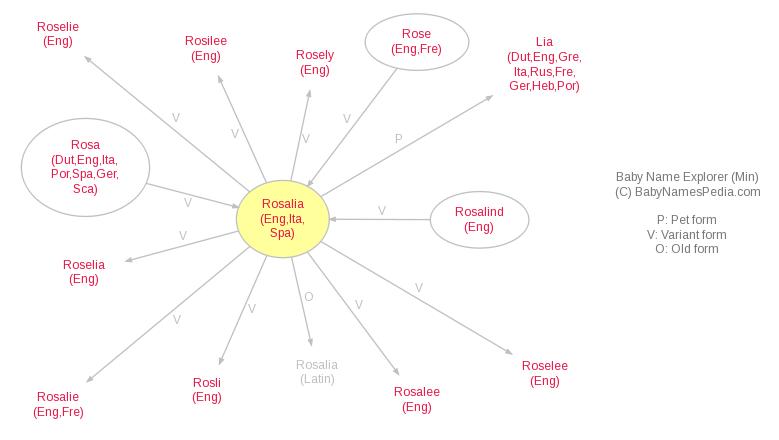