What does Rosalie mean?

[ 3 syll. ro-sa-lie, ros-al-ie ] The baby girl name Rosalie is pronounced RAAZ-aa-Liy- or ROWZaa-Liy- †. Rosalie is of Latin origin, and it is used mainly in English and French.

Rosalie is an English and French variant transcription of Rosalia (English, Italian, and Spanish).

Rosalie is also a variant transcription of Rose (English and French).

Rosalie is popular as a baby name for girls, and it is also perceived to be trendy. At the peak of its usage in 1938, 0.329% of baby girls were named Rosalie. Its ranking then was #66. The baby name has since suffered a marked decline in popularity. In 2018, it ranked at #208 with a usage of 0.079%, enjoying a minor resurgence in the recent decade. Out of all girl names in its group, Rosalie was the 2nd most popular after Rose. It was 66% more regularly used than Rosalie in 2018. 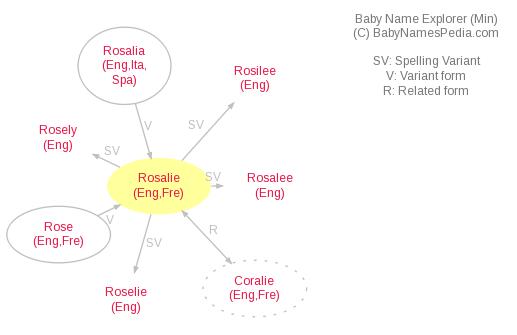