What does Rosalind mean?

[ 3 syll. ro-sa-lin(d), ros-ali-nd ] The baby girl name Rosalind is pronounced as RAAZ-aa-LihND or ROWZaa-LihND †. Rosalind is primarily used in the English language. Its language of origin is Germanic and Latin. From Germanic roots, its meaning is horse shield of lime wood; pretty rose. An original form of Rosalind is Roslindis (Germanic). The name was originally derived from the Germanic elements 'hros' or 'hruod' combined with either 'lind' (meaning weak, soft, gentle, friendly) or 'linta' (lime, linden, lime-wood shield). It was first introduced by the Normans into England; it was later in the medieval period associated via folk etymology with the Latin 'rosa' and 'linda', with the attractive meaning 'pretty rose'. The name grew in use in the 16th century, popularized via works such as Edmund Spenser's pastoral poetry The Shephearde's Calendar (1579), Thomas Lodge's prose romance Rosalynde (1590), and Shakespeare's pastoral comedy As You Like It (1599).

In addition, Rosalind is a form of the English and French name Rose.

What are the Variant Forms of Rosalind?

Rosalind is an unusual baby girl name. Its usage peaked modestly in 1942 with 0.038% of baby girls being given the name Rosalind. It had a ranking of #293 then. The baby name has experienced a steep decline in frequency since then, and is now of sporadic use. In 2018, among the family of girl names directly linked to Rosalind, Rose was the most commonly used. 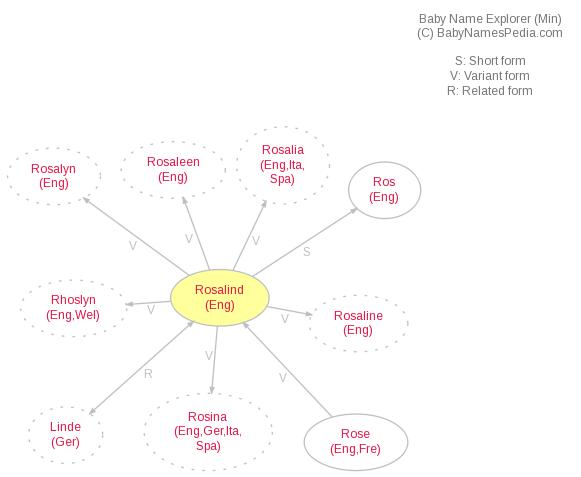