What does Rosamund mean?

[ 3 syll. ro-sa-mun(d), ros-amu-nd ] The baby girl name Rosamund is pronounced as ROW-Zaa-MahND †. Rosamund is used predominantly in English and its origin is Germanic. The name Rosamund means horse protector; rose of the world; pure rose. The name is derived of the Germanic elements 'hros' or 'hruod' combined with 'munt' (meaning protection, protector); it was later in the medieval period associated with the Latin 'rosa' combined with the second element 'mundi' or 'munda', giving rise to the meaning 'rose of the world' or 'pure rose'. Both of the latter meanings refer to titles borne by the Virgin Mary. The name was first introduced by the Normans into England, where it was later famous from Rosamund Clifford (-1176), the mistress of Henry II who was known as 'Fair Rosamond' or 'Rose of the World' for her legendary beauty. She became the subject of the Joseph Addison opera Rosamond (1707) and the Algernon Swinburne play Rosamond (1860).

The shortenings Ros (English) and Roz (English), and the spelling variants Rosamond (English and French) and Rosemonde (French) are other forms of the name.

Rosamund is not popular as a baby girl name. It is not listed within the top 1000. 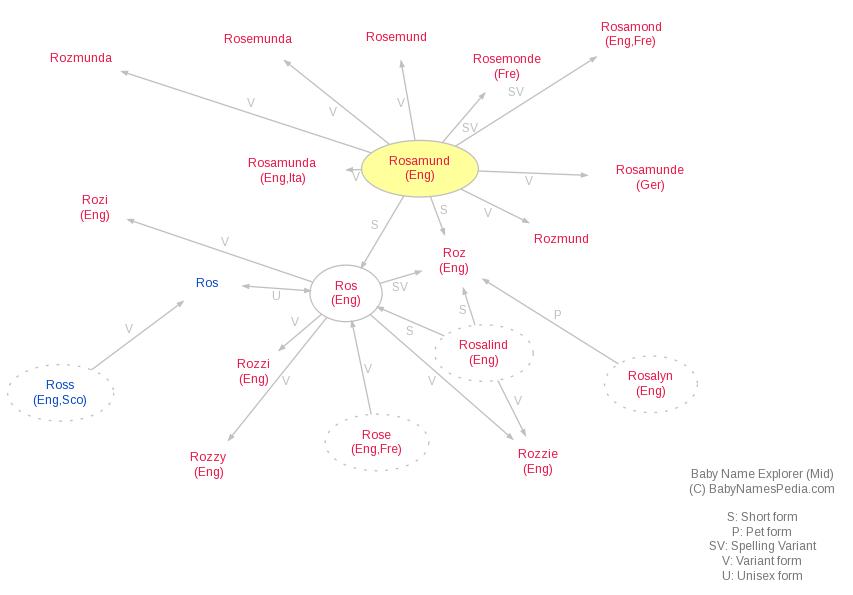