What does Rosanne mean?

[ 2 syll. ro-san-ne, ros-a-nne ] The baby girl name Rosanne is pronounced as RowZ-AEN †. Rosanne is primarily used in English and its language of origin is Latin. This is a modern coinage from the combination of Rose and Anne, possibly under the influence of the name Roxane.

Rosanne is an English form of the English, German, and Italian name Rosanna.

The name Rosanne is widely used; it has 26 forms that are used in English and other languages. English forms of Rosanne include Rosan, Rosane, Rosanna, Rose Ann, Rose Anne, Rosean, Roseane, Roseann, Roseanna, Rosezana, Rosian, Rosiane, Rosianne, Rossane, Rossanne, Rosyanne, Rozan, Rozane, Rozanna, and Rozeanne. Other English forms include the diminutive Rossie, and the spelling variants Rosann, Roseanne, Rozann, and Rozanne. A form of the name used in other languages is the Italian and Spanish Rosana.

Variant forms inherit the origin and meaning of the name Rosanne.

Rosanne is an unusual baby girl name. Its usage peaked modestly in 1953 with 0.038% of baby girls being named Rosanne. It had a ranking of #303 then. The baby name has steeply slipped in popularity since then, and is now used on an infrequent scale. In 2018, among the family of girl names directly related to Rosanne, Rose was the most commonly used. 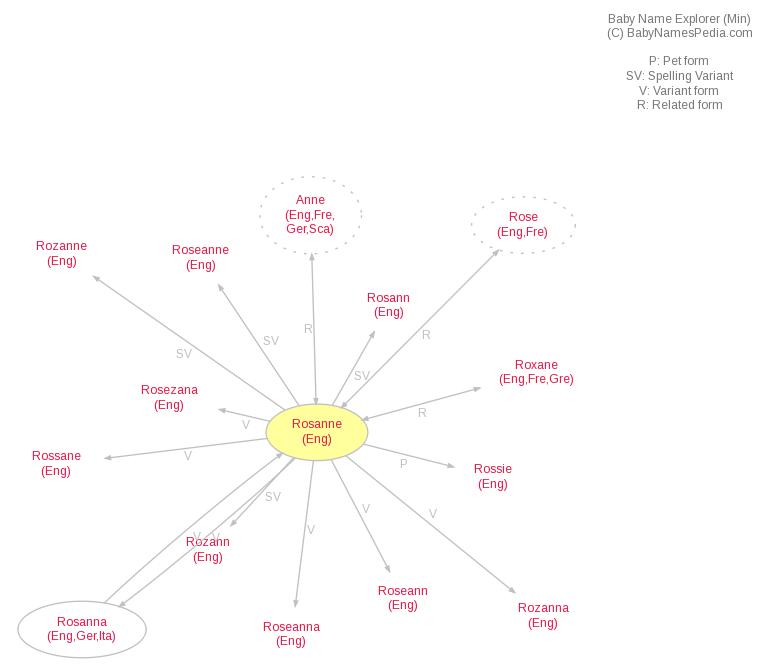