What does Rosario mean?

[ 3 syll. ro-sa-rio, ros-ar-io ] The baby girl name Rosario is also used as a boy name, though it is more commonly a girl name. It is pronounced Row-SAA-RYow in Spanish †. Rosario's origin is Spanish, and its use, English, Italian, and Spanish. The meaning of Rosario is 'rosary'. The name is derived from 'Nuestra Señora del Rosario', a Spanish title of the Virgin Mary meaning 'Our Lady of the Rosary'. The rosary, its name derived from the Latin element rosarium, has been an important Catholic symbol of devotion since the 15th century; in Spanish, the rosary is known as 'el rosario'. See Rosario for more information.

Rosario has 14 forms that are used in English and foreign languages. English forms of the name include Rasareo, Rasaria, Rasario, Rosareo, Rosarie, Rosarita, Rosary, and Rosaura.

Rosario is uncommon as a baby girl name. At the modest height of its usage in 1972, 0.009% of baby girls were named Rosario. It was #850 in rank then. The baby name has dropped in popularity since then, and is of only sporadic use now. Within all girl names in its family, Rosario was nevertheless the most popular in 2018. Although Rosario is used more commonly as a baby girl name today, there was a period from 1901 to 1937 that it was more popular with boys. After 1938, increasingly the name became more popular with baby girls than with boys. In 1941, 18% more baby girls than boys were given the name Rosario. 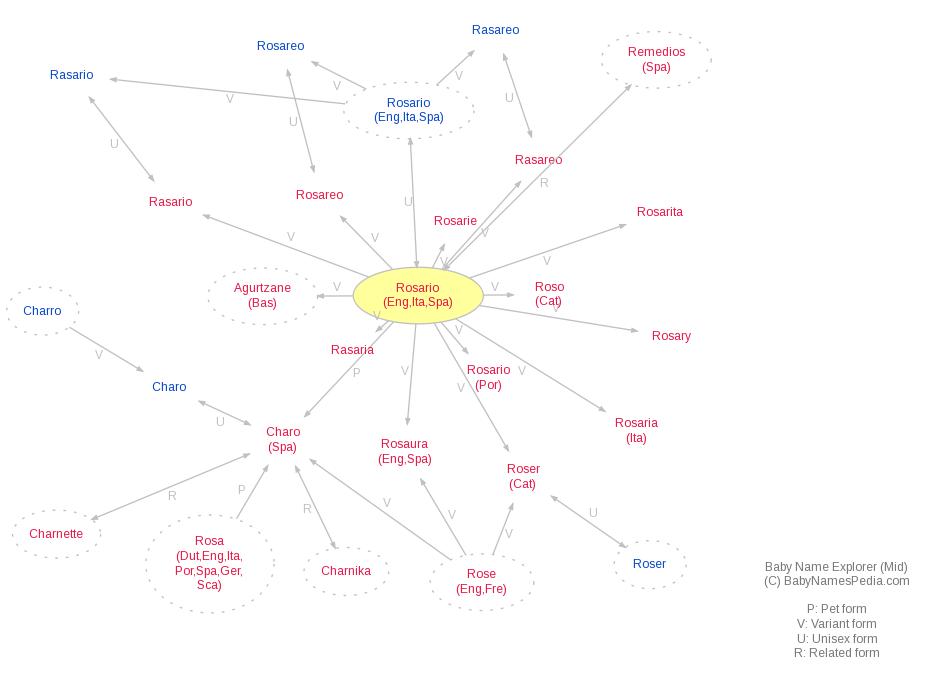