What does Rosie mean?

[ 2 syll. ro-sie, ros-ie ] The baby girl name Rosie is pronounced as ROW-Ziy- †. Rosie is used chiefly in English. Its origin is Germanic and Latin.

Rosie is a familiar form of the name Rosalind (English).

Rosie is also a familiar form of the name Rose (English and French) in the English language.

Rosie is also a familiar form of the name Rosemary (English).

Rosie is a classic favorite. At present it is still rather popular as a baby girl name, but not to the degree it was in the past, and it is also perceived as fairly trendy. In 1900, 0.181% of baby girls were named Rosie. It was #116 in rank then. The baby name has experienced a substantial fall in popularity since then. In 2018, its usage was 0.026% and its ranking #619, somewhat regaining its popularity in the recent decade. Among the family of girl names directly related to Rosie, Rose was the most widely used. In 2018, it was 5 times more regularly used than Rosie. 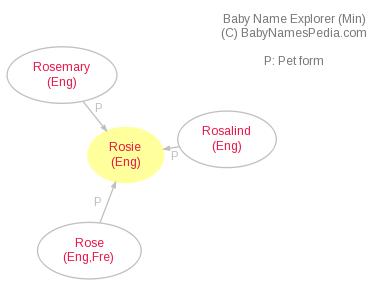