What does Roswell mean?

[ 2 syll. ro-swel(l), ros-we-ll ] The baby boy name Roswell is pronounced ROW-ZWehL- †. Roswell is of Old English origin and it is predominantly used in the English language. The name means 'famous well; horse well'. The first name is derived from the surname, which is itself from a place name. The latter could be formed from the first element hrod or hros combined with the second element waell (meaning 'pool, stream, spring, well').

Roswell is a rare baby boy name. At the modest peak of its usage in 1912, 0.005% of baby boys were given the name Roswell. It had a ranking of #990 then. The baby name has declined in popularity since then, and is currently used on an infrequent scale. Out of all boy names in its family, Roswell was nonetheless the most regularly used in 2018. 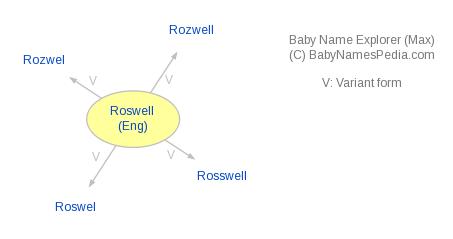