What does Rowena mean?

[ 3 syll. ro-we-na, row-ena ] The baby girl name Rowena is pronounced Row-WIY-Naa- †. Rowena's language of origin is Old English. It is predominantly used in English, German, and Welsh. The name could be from Hrodwyn (Old English), of the element hrod and wine, or else it could be from Rhonwen (Old Welsh), of the Welsh rhon (meaning 'spear, pike') and gwen ('white, fair, blessed, holy') meaning 'slender and fair'. The name was borne by the legendary 5th century Rowena, the daughter of the Anglo-Saxon leader Hengest; she appeared as the Saxon heroine of Sir Walter Scott's novel Ivanhoe (1819), which subsequently boosted the popularity of the name.

The name Rowena is widely used; it has 26 variants that are used in English and foreign languages. English variants of the name include Ranna, Rawena, Rhonwen, Rhonwyn, Rhowena, Roenna, Row, Rowan, Rowe, Roweena, Rowein, Roweina, Rowen, Rowene, Rowenna, Rowin, Rowina, Rowinna, Rowyn, Rowyna, and Rowynna. Other English variants include the shortenings Rhona, Ron, and Rona, and the familiar form Ronnie. Rovena (Albanian and Portuguese) is a variant of Rowena that is used in foreign languages.

Rowena is a rare baby girl name. At the modest peak of its usage in 1917, 0.020% of baby girls were named Rowena. It was #429 in rank then. The baby name has steeply dropped in popularity since then, and is of only very light use today. In 2018, out of the family of girl names directly related to Rowena, Rowan was the most regularly used. 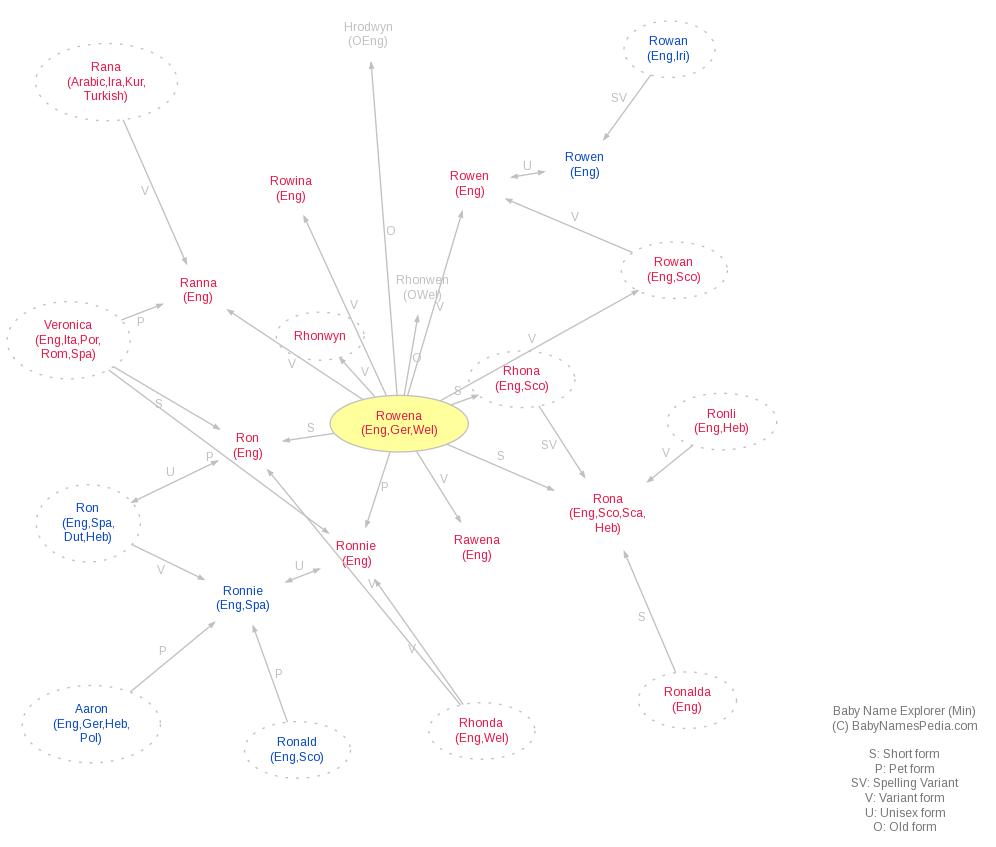