What does Roxana mean?

[ 3 syll. ro-xa-na, rox-ana ] The baby girl name Roxana is pronounced as RaaK-SAEN-ah in English or RowK-SAAN-aa in Spanish †. Roxana is an English, German, and Spanish name of Old Persian origin. It is derived from the word 'raohschna' meaning bright, dawn, light. Older forms of Roxana include Roschana (Old Persian), Roshanak (Old Persian), Roxana (Latin), and Roxane (Old Greek). The name was borne in the 4th century BC by the Persian wife of Alexander the Great. It was later popularized among English speakers through Daniel Defoe's dark novel Roxana (1724). The name also subsequently appeared as the name of the beautiful Roxanne in Edmond Rostand's play Cyrano de Bergerac (1897).

Roxana has 22 variant forms that are used in English and other languages. Variant forms of Roxana used in English include Rexana, Rexanna, Rexanne, Roxane (used in French and Greek as well), Roxanna, Roxannia, Roxi, Roxianna, Roxianne, Roxine, Roxolana, and Rozanne. Other English forms include the familiar forms Roxie and Roxy, and the variant spellings Roxan, Roxann, and Roxanne (used in French as well).

Roxana is uncommon as a baby girl name. At the modest height of its usage in 1987, 0.017% of baby girls were given the name Roxana. It was #617 in rank then. The baby name has markedly fallen in popularity since then, and is today used on an infrequent scale. Within all girl names in its family, Roxana was nonetheless the most popular in 2018. 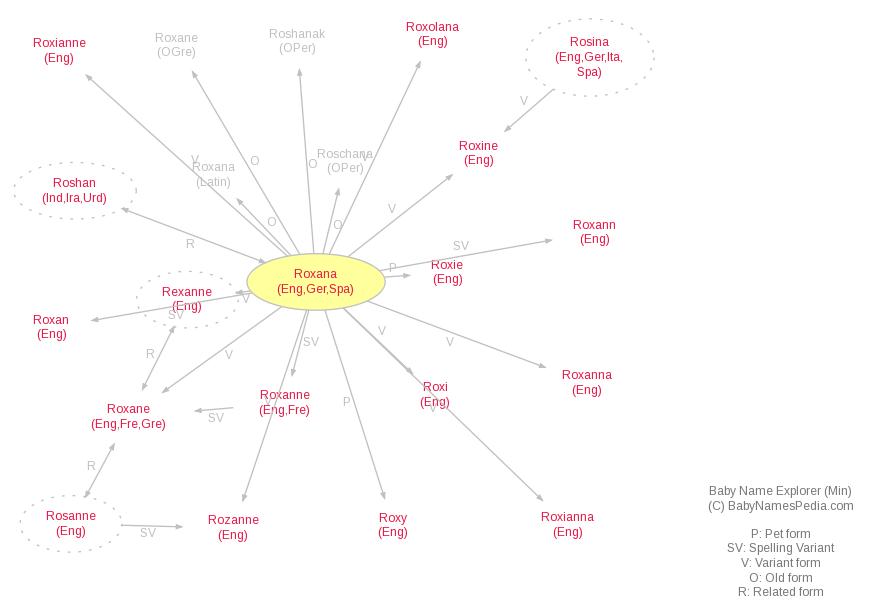