What does Roy mean?

[ 1 syll. roy, ro-y ] The baby boy name Roy is pronounced R-oy †. Roy's language of origin is Irish Gaelic, Celtic, French, and English, and it is used largely in the English, Dutch, French, German, and Scottish languages. From Celtic roots, its meaning is 'ruddy, red-haired; king' - in this context, Roy can be used in the English, French, German, and Scottish languages. The first name was originally derived from the Gaelic nickname Ruadh, of the element ruadh. The name was later adopted by other English speakers, and then associated with the French roi. The name 'Rob Roy' was borne by the Scottish folk hero and outlaw Robert Roy MacGregor (1671-1734), in reference to his red hair; he was later brought to public attention from Sir Walter Scott's novel Rob Roy (1817), thereby promoting the adoption of the name.

In addition, Roy is a variant of Conroy (English).

Roy is also a variant of Gilroy (English and Gaelic).

Roy is also a diminutive form of Leroy (English) in the Dutch and English languages.

Roy is also a short form of Royal (English) in the Dutch and English languages.

Roy is an all-time favorite. At present it is still fairly popular as a baby name for boys, though to a lesser extent than it was before. At the peak of its usage in 1904, 0.811% of baby boys were given the name Roy. It ranked at #21 then. The baby name has since substantially fallen in popularity, and is of only occasional use in recent years. In 2018, it ranked at #542 with a usage of 0.027%, but it was nonetheless the 3rd most popular after Rowan and Royal, out of all boy names in its group. Rowan was used 6 times more than Roy in 2018. The name Roy has mostly been a baby boy name, although it has also been given to girls in the past century. In 1933, the name Roy was given to 102 times as many baby boys than girls. 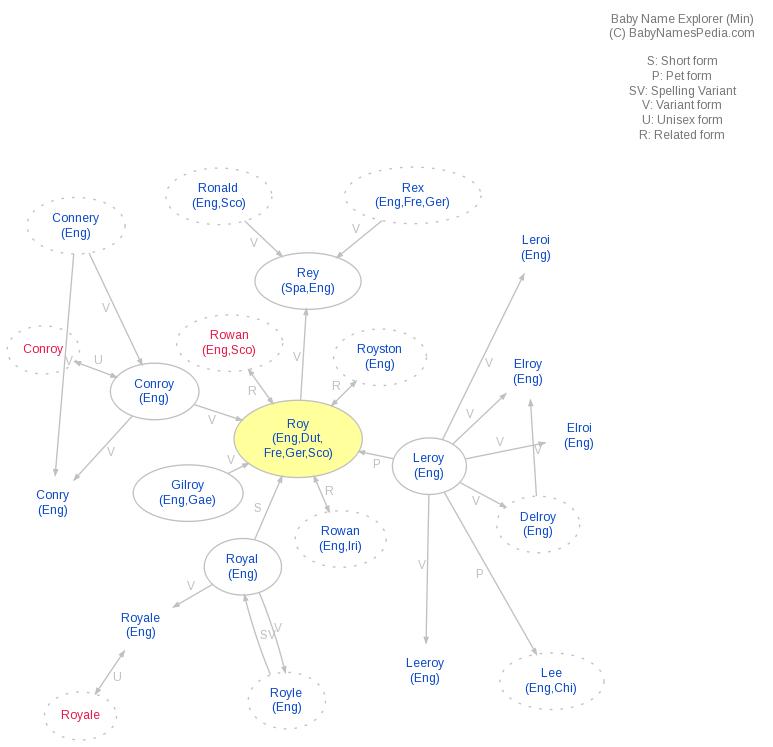