What does Ruby mean?

[ 2 syll. ru-by, rub-y ] The baby girl name Ruby is also used as a boy name, though it is far more popular for girls. It is pronounced as RUW-Biy- †. Ruby is of English origin and it is also used mainly in English. It is from ruby ; rubeus which means 'red'. The first name is derived from the jewel name, itself of the Latin rubeus. It was taken up at the end of the 19th century.

Ruby has 20 forms that are used in English and foreign languages. English forms of the name include Roobee, Ruba, Rubby, Rube, Rubea, Rubee, Rubetta, Rubette, Rubey, Rubia, Rubianne, Rubina (used in Italian as well), Rubinia, Rubyna, and Rubyne. Other English forms include the spelling variants Rubi, Rubie, and Rubye. Forms used in foreign languages include the Hebrew Bareket and the Latin Rubí.

Ruby is popular as a baby girl name, and it is also perceived as trendy. Its usage peaked in 1911 with 0.763% of baby girls being named Ruby. It had a ranking of #22 then. The baby name has markedly dropped in popularity since then. In 2018, it ranked at #74 with a usage of 0.192%, having regained its popularity somewhat in the recent decade. Among all girl names in its family, Ruby was the most commonly used. Ruby has in the last century been mainly given to baby girls. There were 81 times more baby girls than boys who were named Ruby in 1940. 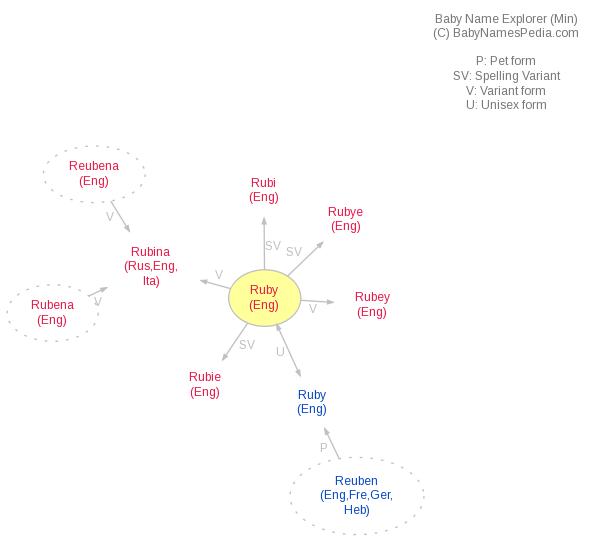