What does Rudra mean?

[ 2 syll. ru-dra, rud-ra ] The baby boy name Rudra is also used as a girl name. Its pronunciation is RuwDRah- †. Rudra is largely used in the Indian language and its origin is Sanskrit. The name's meaning is the roarer; the howler. It is derived literally from the word 'rudra' meaning roaring, howling. In Hindu mythology, Rudra is a Vedic god associated with the wind and the hunt. He is also known as 'The Roarer' or 'The Howler'. He is the equivalent of the god Shiva; the latter name evolved as an epithet of Rudra in the post-Vedic period.

Rudra is rarely used as a baby name for boys. It is not listed in the top 1000 names. 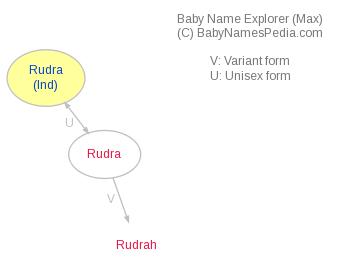