What does Rufus mean?

[ 2 syll. ru-fus, ruf-us ] The baby boy name Rufus is pronounced as RUW-FahS (English) †. Rufus is primarily used in English and it is of Latin origin. Rufus is of the meaning ruddy, red-haired. It is derived literally from the word 'rufus' which is of the meaning red. The name was originally a Roman nickname. It was borne by William II of England (1056-1100), the son and successor of William the Conqueror; he was known as 'William Rufus' in reference to his ruddy complexion or red hair. The given name was first used by English speakers in the 19th century.

Rufus has 12 forms that are used in English and other languages. English forms include Rayfus, Rufe, Rufes, Ruffino, Ruffis, Ruffo, Ruffous, Ruffus, Rufo, and Rufous. Forms of Rufus used in other languages include Rufin (Polish) and Rufino (Italian, Portuguese, and Spanish).

Rufus is a rare baby name for boys. At the modest peak of its usage in 1909, 0.117% of baby boys were named Rufus. Its ranking then was #131. The baby name has since suffered a steep fall in popularity, and is now used on an infrequent scale. Out of all boy names in its group, Rufus was nevertheless the most regularly used in 2018. 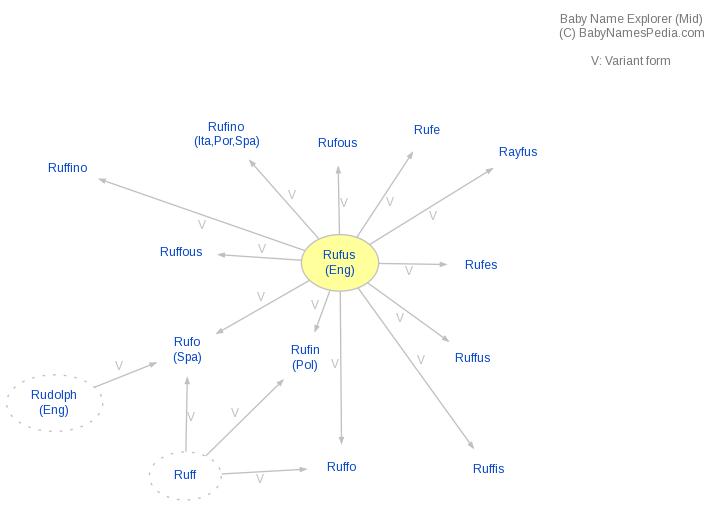