What does Russell mean?

[ 2 syll. rus-sel(l), ru-sse-ll ] The baby boy name Russell is pronounced as RAHS-ehL †. Russell is used predominantly in the English, Irish, and Scottish languages. Its origin is Old French. The name means little ruddy one, little red-haired one. The first name is derived from the English surname, which originated as the nickname Rousel (Old French), itself a diminutive of the French 'rous', cognate with the Latin 'russus'. The surname has been borne by the Earls and Dukes of Bedford since the 16th century, thereby acquiring an aristocratic flavor. The given name was first used in the 19th century. It has sometimes been bestowed in tribute to the philosopher Bertrand Russell (1872-1970), who was noted as an advocate for social reform and pacifism.

Russell has 19 variations that are used in English and other languages. Variations of Russell used in English include Roussell, Rus, Rusel, Rusell, Russelle, Russie, Russill, Ruste, Rusten, Rustie, Rustin, Ruston, and Rustyn. The short forms Rush and Russ, the diminutive Rusty, and the variant spelling Russel (used in Scottish as well) are other English forms. Lukela (Hawaiian) and Rosario (Italian and Spanish) are foreign variations of the name.

Russell is a classic favorite. Today it is still a rather popular baby boy name, but not as much as it was in the past. Its usage peaked in 1914 with 0.376% of baby boys being given the name Russell. It had a ranking of #49 then. The baby name has steeply fallen in popularity since then, and it is of modest use in recent years. In 2018, its usage was only 0.040% and its ranking #413, but it was nonetheless the most popular among all boy names in its family. 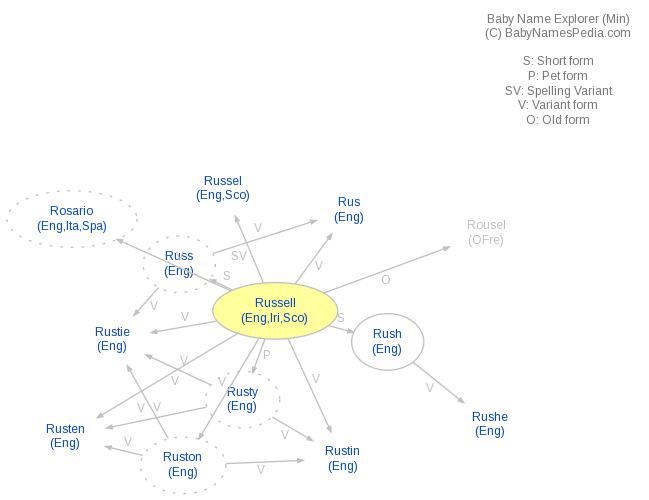