What does Sabina mean?

[ 3 syll. sa-bi-na, sab-ina ] The baby girl name Sabina is pronounced Saa-BIY-Naa (Italian, Polish, Spanish) †. Sabina has its origins in the Latin language. It is used largely in Czech, English, Italian, Polish, Portuguese, Romanian, Russian, Slavic, and Spanish. The name Sabina means 'Sabine woman; catlike'. An old form of the name is Sabina (Latin). The name is derived from the Sabines, the name of the Italic tribe who lived in ancient Italy before the Romans took over their land and captured and married their women; the women later sucessfully prevented warfare between the returning Sabine men and the Romans. Sabine women were known to be slender and feminine; thus the word 'Sabine' was later associated with 'catlike' in the late 19th century. The name was borne by two Roman empresses, Poppaea Sabina (30-65), the second wife of Nero, and Vibia Sabina (86-137), the wife of Hadrian. It was also borne by Saint Sabina (-126), who was martyred in Rome. The first name was taken up by English speakers in the 17th century and it saw a modest revival in the 19th century. The name Sabina is used as an Anglicized form of the Irish Gaelic Sadhbh. Sabina is the feminine version of the Italian Sabino.

The name Sabina is used to a great extent; it has 31 forms that are used in English and foreign languages. English forms of Sabina include Beanie, Sabeana, Sabeen, Sabeena, Sabeina, Sabenah, Sabia, Sabiena, Sabin, Sabinah, Sabine (used in Finnish, French, German, and Latvian as well), Sabiniana, Sabiny, Saby, Sabyna, Saveena, Savin, Savina (used in Italian and Russian as well), Savine, Sebina, Sebinah, Sebyna, Sebynah, and Zabina (used in Scandinavian as well). Other English forms include the contracted form Bina (used in Czech, Hebrew, and Italian as well), and the spelling variant Sabena.

Sabina is rare as a baby girl name. At the modest peak of its usage in 1916, 0.009% of baby girls were named Sabina. It had a ranking of #703 then. The baby name has slipped in popularity since then, and is currently of only sporadic use. Out of all girl names in its family, Sabina was nevertheless the most regularly used in 2018. 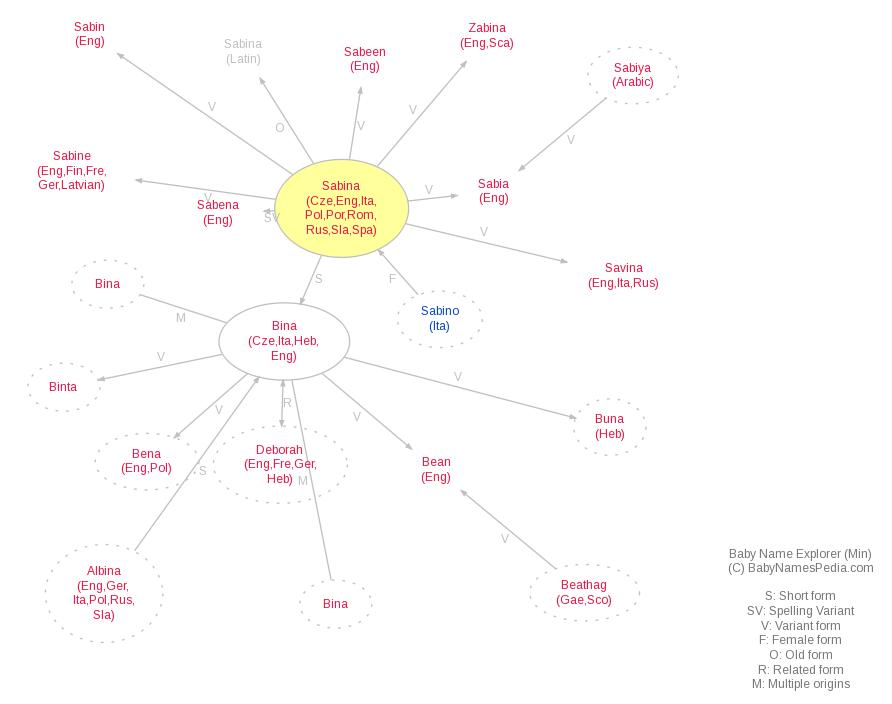