What does Sabrina mean?

[ 3 syll. sa-bri-na, sab-r-ina ] The baby girl name Sabrina is pronounced in English as Sah-BRIYN-ah or in German as ZaaP-RIY-Naa †. Sabrina's language of origin is Hebrew and Celtic. It is predominantly used in Czech, English, German, and Italian. Habren (Celtic), Hafren (Celtic), and Sabrina (Latinized) are original forms of the name. The name was borne in Celtic mythology by Hafren, a princess who was cast into the River Severn in Wales. The river was variously known as Habren via the works of Geoffrey of Monmouth, or as the Latinized form Sabrina in works by Tacitus and Bede. According to legend, the river was supposedly named after the princess, but in fact the character was so named or created to explain the origins of river name. The legendary Sabrina later appeared in literary works such as John Milton's masque Comus (1637), as a water nymph of the Severn who frees the heroine on account of the latter's virtuous character. It also appeared in Sabrina Fair (1953), a romantic comedy by Samuel A. Taylor which cited Milton's work. The first name was adopted by English speakers in the 19th century.

Sabrina is a diminutive of Sabra (English and Hebrew).

The name Sabrina is widely used; it has 35 variants that are used in English and foreign languages. English variants of Sabrina include Breena, Cabrina, Sabre, Sabreana, Sabreanah, Sabreane, Sabreen, Sabreenah, Sabreene, Sabreina, Sabrene, Sabriena, Sabrin, Sabrinas, Sabrinia, Sabriniah, Sabrinna, Sabriya, Sabryn, Sabrynah, Sabryne, Sabrynna, Saprina, Sebree, Subrina, Zabrina, and Zavrina. Other English forms include the shortenings Brina and Sabrine, and the spelling variants Sabreena, Sabrena, Sabrinah, Sabryna, and Sebrina. Xabrina (Latin) is a variant of the name that is used in foreign languages.

Variant forms share the origin and meaning of Sabrina.

Sabrina is a rather popular baby girl name. The name's popularity grew from the 1950s up to the 1990s; before that, it was of only irregular use. Its usage peaked modestly in 1997 with 0.305% of baby girls being named Sabrina. It had a ranking of #53 then. The baby name has experienced a decline in popularity since then. In 2018, it ranked at #427 with a usage of 0.040%, but it was nevertheless the most commonly used among all girl names in its family. 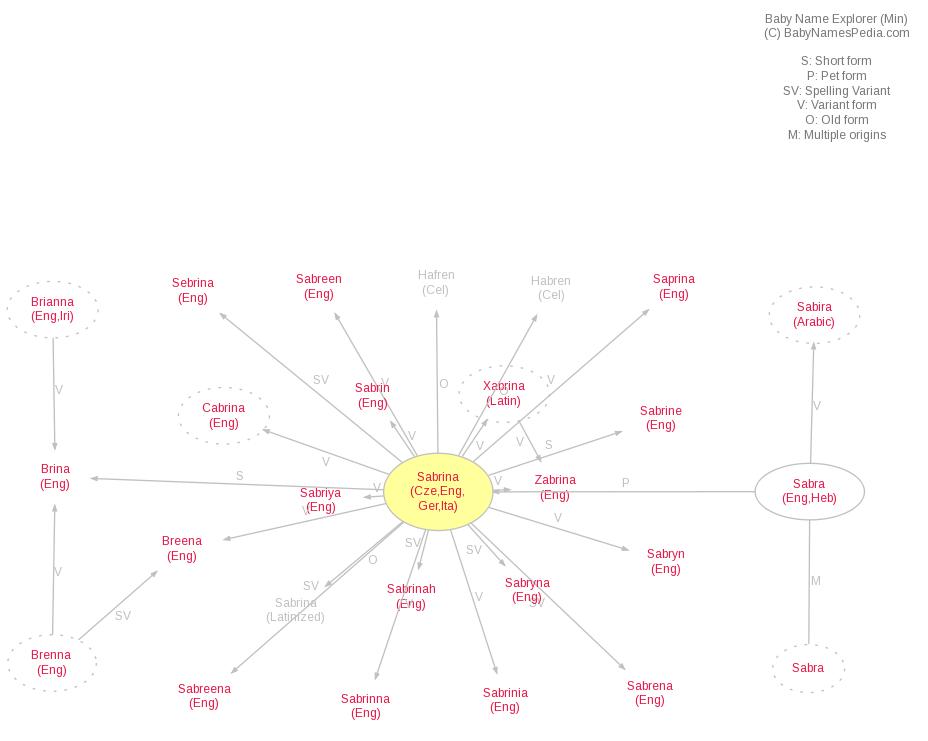