What does Sal mean?

[ 1 syll. sal, sa-l ] The baby girl name Sal is also used as a boy name, with the latter form being far more popular. It is pronounced as SaeL †. Sal has its origins in the Hebrew language. It is used largely in English and Italian. This has been used as a short form of names starting with 'Sal-'.

Sal is also a form of the English, French, and German Salome in the English language.

Sal is also a contracted form of the English, French, German, Hebrew, and Scandinavian Sarah in the English language.

Forms of Sal include the names Sahl and Sale.

Sal is not commonly used as a baby girl name. It is not in the top 1000 names. In 2018, among the family of girl names directly related to Sal, Sarah was the most frequently used. Sal has mainly been a boy name in the last century. 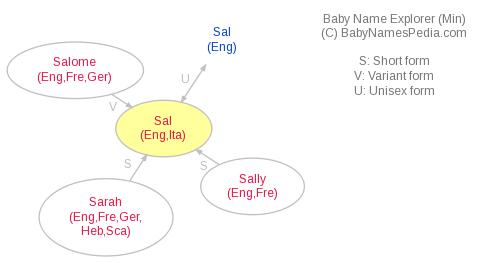