What does Sally mean?

[ 2 syll. sal-ly, sa-lly ] The baby girl name Sally is pronounced SAEL-iy- †. Sally's origin is Hebrew, and its use, English and French. The name first developed as a diminutive of Sarah. It is consistent with the way other English diminutives, such as Molly, are derived by replacing '-r-' with '-ll-'. The name was popularized by the Henry Carey poem Sally in Our Alley (1715) and the Gracie Fields romantic war film Sally in Our Alley (1931) which was loosely based on the former. The name was also made known by the Christopher Isherwood book Goodbye to Berlin (1946) which featured a fictional lead named Sally Bowles; this was later adapted into the play I Am a Camera (1951), the Broadway musical Cabaret (1966), and the film Cabaret (1972).

What are the Variant Forms of Sally?

Variant forms share both the origin and meaning of the name Sally.

Sally is uncommon as a baby name for girls. At the modest height of its usage in 1938, 0.375% of baby girls were given the name Sally. It ranked at #54 then. The baby name has since experienced a substantial decline in popularity, and is used only on an infrequent scale today. In 2018, within the group of girl names directly linked to Sally, Sarah was the most popular. 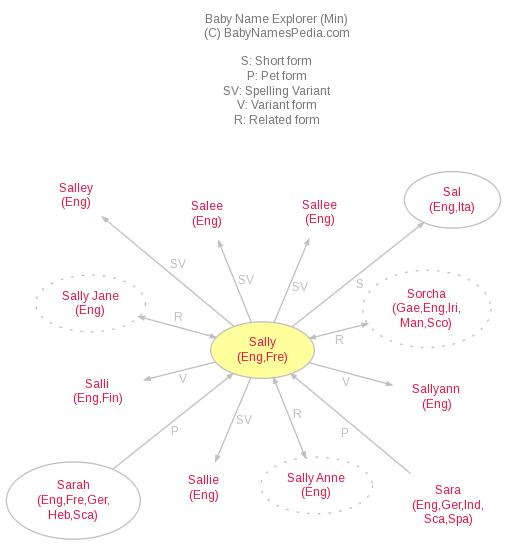