What does Salome mean?

[ 3 syll. sa-lo-me, sal-ome ] The baby girl name Salome is pronounced Sah-LOW-Miy in English †. Salome's language of origin is Hebrew. It is predominantly used in English, French, and German. The name is derived from the Greek form of an Aramaic name of obscure origins but related to the Hebrew shalom.

The name was widely used in biblical times until it was associated, via the records of the Jewish historian Josephus, with Salome the step-daughter of King Herod; at the behest of her mother Queen Herodias, Salome asked the king for the head of John the Baptist and was granted her wish. The name was thereafter used only on an irregular basis, although it was also borne in the Bible by a woman present at the Resurrection of Jesus who was also the mother of the apostles James and John. The name was then pronounced as the two-syllable SAHLowm-, with the stress on the first syllable. It was later adopted by English speakers in the 19th century, promoted by the Oscar Wilde tragedy play Salomé (1894) and the Richard Strauss opera Salome (1905), which was based on the Wilde's work. Salome is the feminine version of the English, Hebrew, Romanian, and Slavic Solomon.

Both the origin and meaning of the name Salome is inherited by all variant forms.

Salome is an uncommon baby girl name. At the modest height of its usage in 1903, 0.008% of baby girls were named Salome. It was #710 in rank then. The baby name has slipped in popularity since then, and is currently used only on a very light scale. Within all girl names in its family, Salome was nevertheless the most popular in 2018. 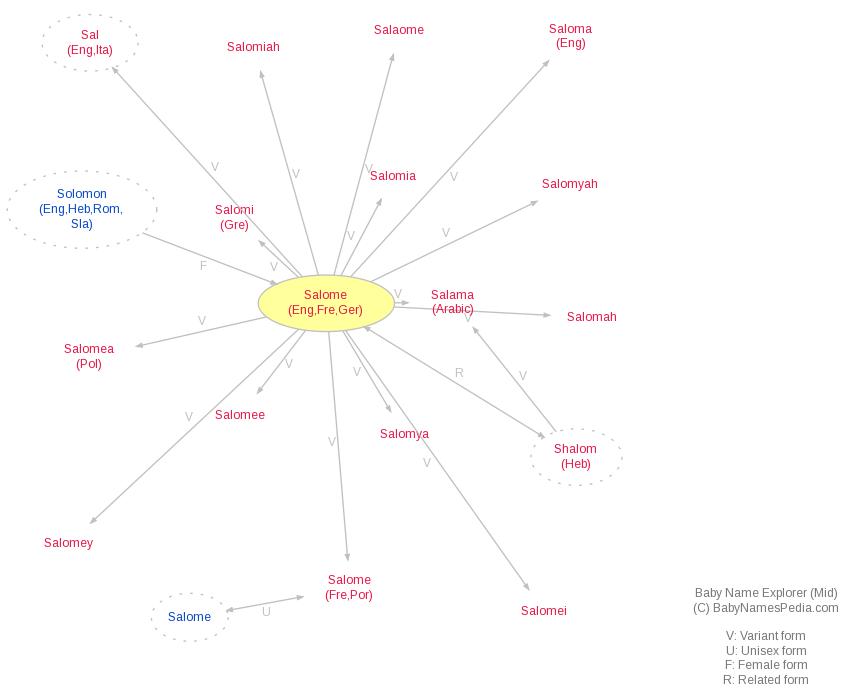