What does Salvador mean?

[ 3 syll. sal-va-dor, sa-lvad-or ] The baby boy name Salvador is pronounced as SAELVaa-Daoer †. Salvador is of Latin origin. It is used mainly in English and Spanish. The meaning of Salvador is 'savior'. It is a biblical name derived from salvator which means 'saviour' ; salvare 'to save'. Salvator (Latin) is an original form of the name. The name is known as one of the epithets of Jesus; hence the name has been popular with Roman Catholics. It was made known by the Spanish Catalan surrealist painter Salvador Dalí (1904-1989).

Salvador has 17 variations that are used in English and foreign languages. English variations of the name include Chavo, Salbador, Salbatore, Salvado, Salvadore, Salvadro, Salvatorio, Salvidor, Salvodor, Sauveur, Savadore, and Soterios. Other English variants include the contracted forms Sal and Salvino. Salvator (German), Salvatore (Italian), and Xalvador (Spanish) are variations of Salvador that are used in foreign languages.

Salvador is an all-time favorite. Today it is still rather popular as a baby boy name, but to a lesser degree than it was in the past. The name's popularity increased from the 1900s up to the 1990s. Its usage peaked modestly in 1994 with 0.044% of baby boys being named Salvador. It was #300 in rank then. The baby name has experienced a drop in popularity since then. In 2018, it ranked at #647 with a usage of 0.020%, but it was nevertheless the most popular among all boy names in its family. Salvador was used 63% more than the subsequent ranked name, Salvatore, in 2018. 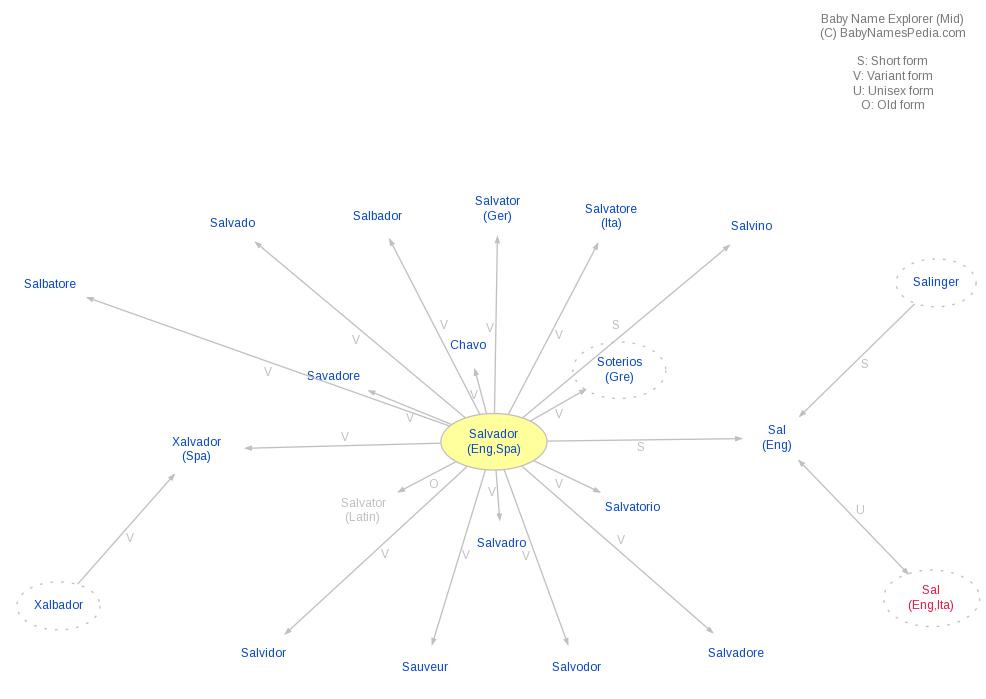