What does Samiya mean?

[ 3 syll. sa-mi-ya, sam-iya ] The baby girl name Samiya is pronounced Saa-MIY-Yaa- †. Samiya is of Arabic origin and it is also used mainly in Arabic. The name Samiya means 'high, exalted, praised, sublime'. Its meaning is derived from the word sami. Samiya is the feminine version of the Arabic, Hebrew, Hungarian, Iranian, Turkish, and Finnish Sami.

Samiya is uncommon as a baby girl name. At the height of its usage in 2011, 0.014% of baby girls were named Samiya. It had a ranking of #963 then. The baby name has markedly slipped in popularity since then, and is currently used only on a very modest scale. Within all girl names in its family, Samiya was nevertheless the most widely used in 2018. 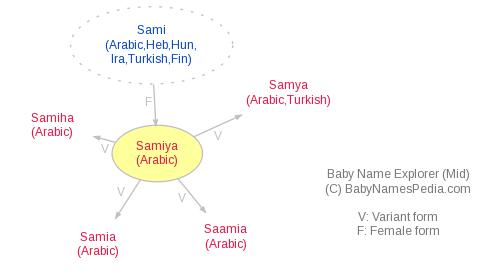