What does Sancho mean?

[ 2 syll. san-(c)ho, sa-n-cho ] The baby boy name Sancho is pronounced SAEN-SHow †. Sancho's language of origin is Latin, and it is predominantly used in the Portuguese and Spanish languages. The name's meaning is 'sacred'. Its meaning is derived from the element sanctus.

Another variant of Sancho is the short form San.

Sancho is a rarely used baby name for boys. It is not ranked within the top 1000 names. 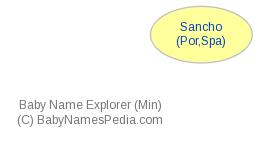