What does Sandra mean?

[ 2 syll. san-dra, sa-nd-ra ] The baby girl name Sandra is pronounced in English as SAEN-DRah, in Dutch and Italian as SAAN-DRaa, or in German as ZAAN-DRaa †. Sandra is mainly used in English, Estonian, French, German, Italian, and Spanish, and it is of Old Greek origin.

Sandra is a contracted form of Alexandra in the English, Estonian, French, German, Italian, and Spanish languages.

Sandra is also a contracted form of the English and German name Cassandra in the English language.

Sandra is also a variant form of the English, German, and Greek name Kassandra in the English language.

Sandra is a classic favorite. At present it is still somewhat popular as a baby name for girls, though it was in more widespread use in the past. The name increased in popularity from the 1910s up to the 1940s. Its usage peaked in 1946 with 1.965% of baby girls being named Sandra. Its ranking then was #6. The baby name has since experienced a substantial decline in frequency. In 2018, its usage was only 0.015% and its ranking #975. Among the group of girl names directly related to Sandra, Alexandra was the most frequently used. In 2018, its use outnumbered Sandra's by 9 times. The name Sandra has predominantly been a baby girl name, though it has also been given to boys in the past century. In 1964, 259 times more baby girls than boys were given the name Sandra. 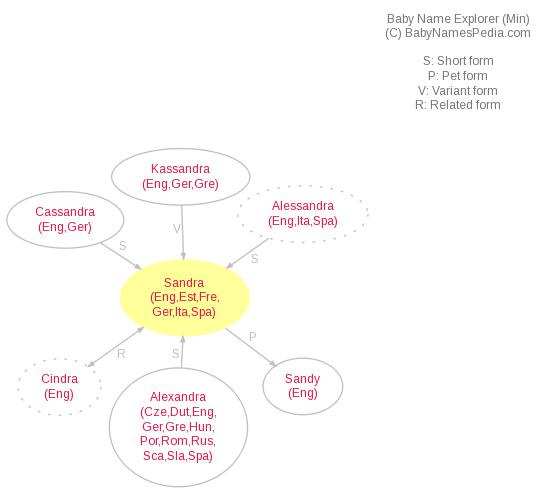