What does Santos mean?

[ 2 syll. san-tos, sa-nt-os ] The baby boy name Santos is pronounced as SAE-NTowS †. Santos is used chiefly in Spanish, English, and Portuguese. It is derived from Latin and Spanish origins. From Spanish roots, its meaning is saints - in this context, Santos can be used in the English, Portuguese, and Spanish languages. It is derived from the word 'santo' with the meaning saint. The name is usually bestowed by Roman Catholics to invoke the protection of saints for the child, or else given to a child born on All Saints' Day.

Santos is a variant of the name Santo (Italian and Spanish) in the Spanish language.

San, Santo, Sants, Santy, and Sanzio are variants of Santos.

Santos is an unusual baby boy name. Its usage peaked modestly in 2006 with 0.014% of baby boys being named Santos. It was #718 in rank then. The baby name has experienced a steep fall in popularity since then, and is today of infrequent use. Among all boy names in its family, Santos was nevertheless the most regularly used in 2018. Although there were times from 1915 to 1915 that Santos was more popular with girls, today it is used more commonly as a boy name. In 1929, 70% more boys than girls were given the name Santos. 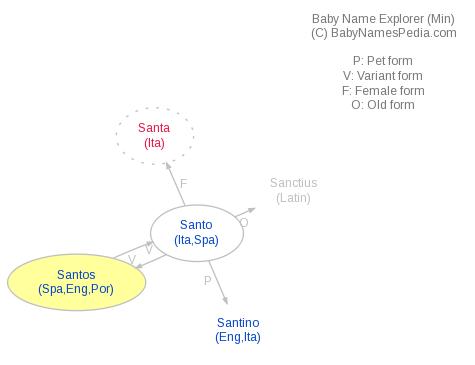