What does Sara mean?

[ 2 syll. sa-ra, sar-a ] The baby girl name Sara is pronounced as SAER-ah or SEHR-ah in English, SAA-Raa in Dutch, Polish and Spanish, or ZAA-Raa in German †. Sara is mainly used in English, German, Indian, Scandinavian, and Spanish. Its language of origin is Hebrew. Sara is a spelling variant of the English, French, German, Hebrew, and Scandinavian name Sarah.

Sara is a classic favorite. At present it is still popular as a baby girl name, but not as much as it was previously. At the height of its usage in 1981, 0.635% of baby girls were named Sara. It was #26 in rank then. The baby name has dropped in popularity since then, and is today used on a modest scale. In 2018, its usage was only 0.092% and its ranking #173. Within the family of girl names directly related to Sara, Sarah was the most popular. In 2018, the name was twice as popular as Sara. 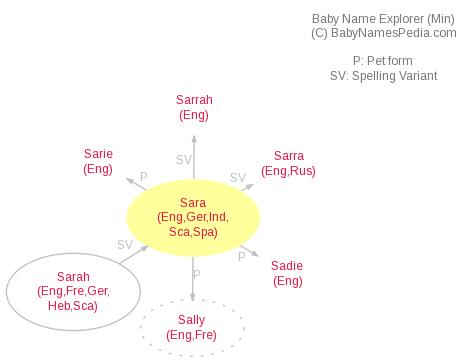