What does Sarai mean?

[ 2 syll. sa-rai, sar-ai ] The baby girl name Sarai is pronounced in English as SEHR-ay †. Sarai is largely used in English and Hebrew, and it is derived from Hebrew origins. A biblical name, it is derived literally from the word 'sarai' which is of the meaning contentious, quarrelsome. The name was borne in the Bible by the mother of Isaac and wife of Abraham; she was earlier known as Sarai, but God gave her the more well-meaning name Sarah 'princess, lady' before her son's birth.

Sarai is a variant transcription of the name Sarah (English, French, German, Hebrew, and Scandinavian).

Sharai (Hebrew spelling variant) is another form of the name.

Sarai is fairly popular as a baby name for girls. The name's popularity has been growing since the 1980s. Its usage peaked modestly in 2018 with 0.041% of baby girls being named Sarai. Its ranking then was #408. In 2018, among the group of girl names directly related to Sarai, Sarah was the most widely used. Its use outnumbered Sarai's by 5 times in that year. 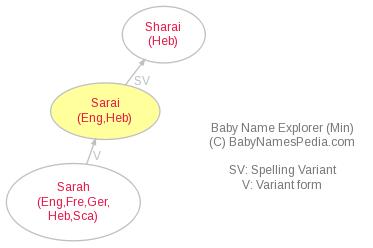