What does Sarita mean?

[ 3 syll. sa-ri-ta, sar-ita ] The baby girl name Sarita is pronounced Saa-RIY-Taa- †. Sarita has its origins in the Hebrew and Sanskrit languages. It is used largely in the English, Spanish, Hebrew, and Indian languages. From Sanskrit roots, its meaning is 'flowing' - in this context, Sarita can be used in the Hebrew, Indian, and Spanish languages.

In addition, Sarita is a diminutive of Sarah (English, French, German, Hebrew, and Scandinavian) in the English and Spanish languages.

Sarita is uncommon as a baby girl name. At the modest height of its usage in 1966, 0.009% of baby girls were given the name Sarita. It had a ranking of #771 then. The baby name has seen a decline in popularity since then, and is of only irregular use today. In 2018, within the family of girl names directly linked to Sarita, Sarah was the most popular. 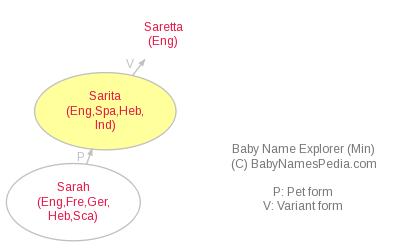