What does Sariyah mean?

[ syll. sa-ri-yah, sar-iy-ah ] The baby boy name Sariyah is pronounced SEHR-YAA- †. Sariyah's origin is Arabic. The name is of the meaning 'clouds at night'.

A variant form of Sariyah is the name Sariya.

Sariyah is rarely used as a baby name for boys. It is not ranked within the top 1000 names. Sariyah has also been used as a girl name. 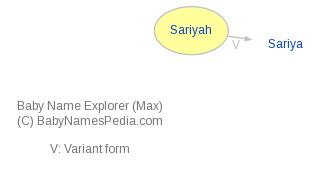