What does Scarlett mean?

[ 2 syll. (s)car-let(t), sc-arle-tt ] The baby girl name Scarlett is pronounced as SKAA-RLehT †. Scarlett's language of origin is Old English and it is predominantly used in English. The first name is derived from the surname, itself from the job title of one who trades in scarlet cloth or makes clothes from scarlet cloth; the word scarlet is itself of the Latin scarlatum. The first name could also have originated as a nickname for one who is known to wear clothes of the color scarlet, such as Will Scarlett, the prominent outlaw of Robin Hood's Merry Men in English folklore. The name was popularized by the heroine Scarlett O'Hara of the Margaret Mitchell novel Gone with the Wind (1936) and the subsequent film (1940), both of which were highly successful. In the book, the character's full name is Katie Scarlett O'Hara; the middle name is from the maiden surname of her grandmother.

The origin and meaning of the name Scarlett is inherited by all variant forms.

Another form of the name is the English spelling variant Scarlet.

Scarlett is a very popular baby name for girls, and it is also regarded as trendy. The name has been growing in popularity since the 1990s. Its usage peaked modestly in 2017 with 0.410% of baby girls being named Scarlett. It ranked at #18 then. In 2018, it ranked at #20 with a usage of 0.389%, and it was the most popular among all girl names in its group. 9 times more girls were named Scarlett than the 2nd most popular name, Scarlet, in 2018. 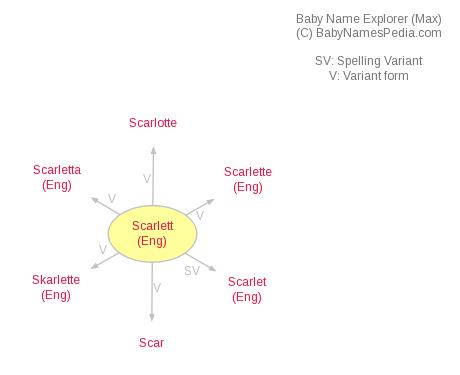