What does Seamus mean?

[ 2 syll. sea-mus, se-am-us ] The baby boy name Seamus is pronounced as -SHEY-MahS †. Seamus is largely used in the Irish, Scottish, and English languages. It is derived from Hebrew origins. This is the English version of Seamas, which is itself an equivalent of James. Its spelling is typical of the translation of the 'j' sound into 'sh' in Celtic languages, which do not have the former sound. The name has been adopted by the general English speaker since the 20th century.

Seamus is an Irish and Scottish variant transcription of the name James (English and Hebrew).

Variant forms inherit the origin and meaning of Seamus.

Seamus is a rare baby boy name. At the peak of its usage in 2008, 0.014% of baby boys were given the name Seamus. It was #751 in rank then. The baby name has steeply fallen in popularity since then, and is now of very modest use. In 2018, out of the family of boy names directly linked to Seamus, James was the most widely used. 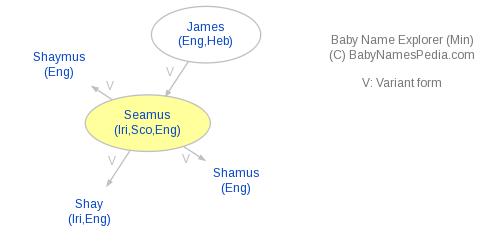