What does Sebastian mean?

[ 3 syll. se-bas-tian, seb-asti-an ] The baby boy name Sebastian is pronounced as Sah-BAES-CHahN (English), Zeh-BAAS-Tiy-aaN (German), or Seh-BAAS-TYaaN (Polish) †. Sebastian is mainly used in English, French, German, Scandinavian, and Spanish. Its language of origin is Old Greek. Old forms of the name include Sebastianos (Old Greek) and Sebastianus (Latin). The name is derived from Sebastianos, of the meaning 'man from Sebasta' in reference to the name of a town in Asia Minor. The place name is itself from the Greek 'sebastos' (meaning respected, venerable, augustus), a translation of the Latin ruling title 'augustus'. The name was borne by Saint Sebastian (-287) who was martyred under Diocletian; he was shot with arrows and was thus often depicted as such in medieval art. The name also appeared in two of Shakespeare's plays, as the brother of Viola in Twelfth Night (1601) and as the brother of Alonso in The Tempest (1611). The name was later made known from the charming but tragic character Lord Sebastian Flyte from the Evelyn Waugh novel Brideshead Revisited (1945) and its subsequent television serial (1981).

Sebastian is a widely used name; it has 39 variant forms that are used in English and other languages. English variant forms of Sebastian include Bastiano, Bastion, Seba, Sebastain, Sebasten, Sebastiane, Sebastin, Sebastine, Sebastion, Sebastyen, Sebastyn, Sebby, and Steb. Other English forms include the shortenings Bastian (used in French, German, and Spanish too), Baz, and Seb, the familiar forms Bazza and Sebbie, and the spelling variant Sabastian.

Sebastian is very popular as a baby boy name, and it is also perceived as trendy. The name has been rising in popularity since the 1950s. At the recent peak of its usage in 2018, 0.521% of baby boys were named Sebastian. It was #18 in rank then. Out of all boy names in its family, Sebastian was the most commonly used in 2018. 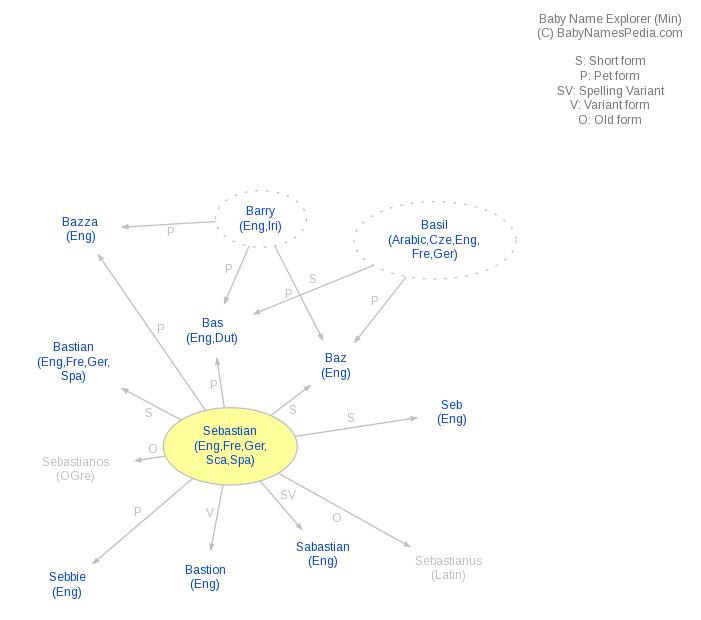