What does Selina mean?

[ 3 syll. se-li-na, sel-ina ] The baby girl name Selina is pronounced Seh-LIY-Naa- †. Selina's language of origin is Latin and Old Greek. It is predominantly used in English, German, and Russian. Old Greek origin: It is from selene which means 'moon' ; selas 'light, shine' ; caelum 'heaven'. The name is derived from Selene (Old Greek), itself of the element selene, or else it is from Caelina (Latin), of the element caelum. It was borne in Greek mythology by the goddess of the moon. The name was adopted by English speakers in the 17th century, and it saw a revival in the mid-19th century. In the 20th century, the name was popularized by the Mexican-American singer Selena (1971-1995) in the US, and by the TV newsreader Selina Scott (1951-) in the UK.

Selina is a form of the Russian, German, English, Italian, and Polish Celina.

Selina is the feminine version of the Italian Selenio.

What are the Variant Forms of Selina?

See also the related form, the English and Slavic Selima.

Selina is a rare baby girl name. At the modest peak of its usage in 1995, 0.037% of baby girls were named Selina. It was #371 in rank then. The baby name has steeply slipped in popularity since then, and is currently used only on a very light scale. In 2018, out of the family of girl names directly related to Selina, Selena was the most popular. 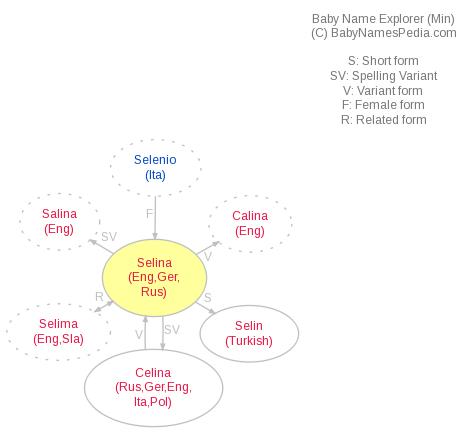