What does Seth mean?

Seth is mainly used in English and German. Its language of origin is Hebrew. A biblical name, it is derived from the word 'sheth' which is of the meaning appointed. The name was borne in the Bible by the third son of Adam and Eve, born after the murder of Abel by Cain. It was adopted by English Puritans in the 17th century, sometimes for boys born after an elder brother's death. By the 19th century, the name has acquired a rural flavor. In Scotland it is taken as an Anglicized form of Seaghdh.

Seth is used predominantly in Indian and it is derived from Sanskrit origins. It is from the words 'setu' which means bridge ; 'sveta' white. The name is derived from a Sanskrit word, either 'setu' or 'sveta'.

Seth is rather popular as a baby boy name. The name's popularity increased from the 1940s up to the 2000s. Its usage peaked in 2000 with 0.322% of baby boys being named Seth. It was #63 in rank then. The baby name has experienced a loss in popularity since then. In 2018, its usage was only 0.044% and its ranking #376, but it was nevertheless the most commonly used among all boy names in its family. 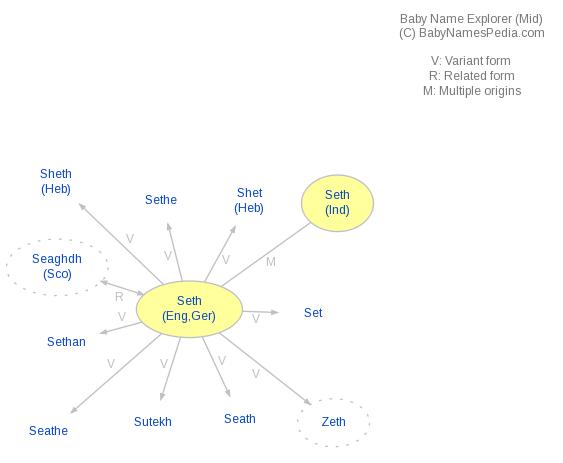