What does Shadrach mean?

[ 2 syll. (s)ha-drac(h), sh-adra-ch ] The baby boy name Shadrach is pronounced in English as -SHAED-RaeK or -SHEY-DRaeK †. Shadrach has its origins in the Babylonian language and it is used largely in English. Shadrach is of the meaning 'command of Aku'. A biblical name, its meaning is derived from the element Shadur-Aku. The meaning refers to Aku, the Babylonian moon god. In a biblical account of the Book of Daniel, the three young men Shadrach, Meshach, and Abednego were thrown into a fiery furnace for defying King Nebuchadnezzar's order for them to worship a pagan idol. They subsequently walked out of the flames unscathed. Shadrach's original Hebraic name was Hananiah.

Shad (English contracted form) is another variant of the name.

Shadrach is uncommon as a baby name for boys. It is listed outside of the top 1000 names. 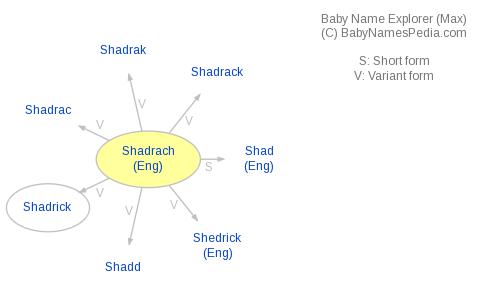