What does Shawn mean?

[ 1 syll. (s)haw(n), sh-a-wn ] The baby girl name Shawn is also used as a boy name, with the latter form being far more popular. It is pronounced -SHaaN †. Shawn's language of origin is Hebrew and it is predominantly used in English. Biblical name: The generic name has been used in various contexts, including the New Testament of the Bible and the Old Testament. Also used by the twelve apostles and various popes. See Shawn for more information.

In addition, Shawn is a form of the English Jane.

Shawn is also a form of the English Sean.

Shawn is also a form of the English Shawna.

See also the related forms, the English Shawnell and the name Trashawn.

Shawn is a rare baby girl name. At the modest peak of its usage in 1970, 0.108% of baby girls were named Shawn. It was #169 in rank then. The baby name has fallen from favor since then, and is of only irregular use today. In 2018, out of the family of girl names directly related to Shawn, Jane was the most commonly used. In the last century Shawn has primarily been a boy name. In 1988, 29 times more boys than girls were given the name Shawn. 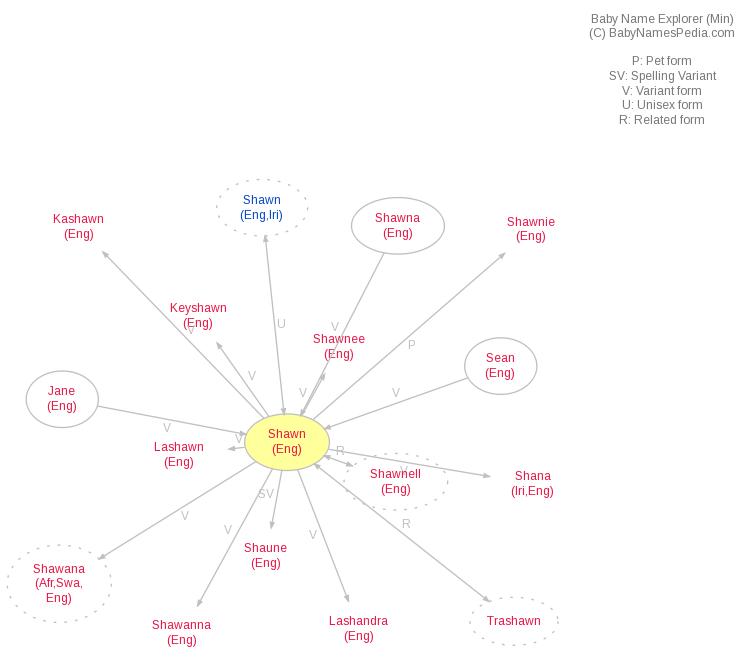