What does Shelley mean?

[ 2 syll. (s)hel-ley, sh-ell-ey ] The baby girl name Shelley is also used as a boy name, though the use for girls is slightly more popular. It is pronounced -SHEHL-iy- †. Shelley's language of origin is Hebrew, Germanic, and Old English. It is predominantly used in English. From Old English roots, its meaning is 'meadow on a slope'. It is from scylf which means 'shelf' ; leah 'wood, clearing, meadow'. The first name is derived from the surname, itself originally a local name from one of several places in England so called; the place could be from Essex, Suffolk, or Yorkshire. The given name was first adopted in the middle of the 19th century, in tribute to Percy Bysshe Shelley (1792-1822), one of the finest English Romantic poets.

In addition, Shelley is a form (English) of Michaela.

Shelley is also a familiar form (English) of the English, French, and German Michelle.

Shelley is also a shortening (English) of the English, French, German, and Yiddish Rachel.

Shelley is also a form of the English Richelle.

Shelley is also a form of the English Rochelle.

Shelley is also a familiar form of the English Shirley.

Shelley is a rare baby girl name. At the modest peak of its usage in 1972, 0.148% of baby girls were named Shelley. It was #126 in rank then. The baby name has steeply dropped in popularity since then, and is currently used only on an infrequent scale. In 2018, out of the family of girl names directly related to Shelley, Rachel was the most widely used. Although Shelley is somewhat used more commonly as a baby girl name today, there was a period prior to 1906 that it was more popular with boys. After 1939, increasingly the name became more popular with baby girls than with boys. 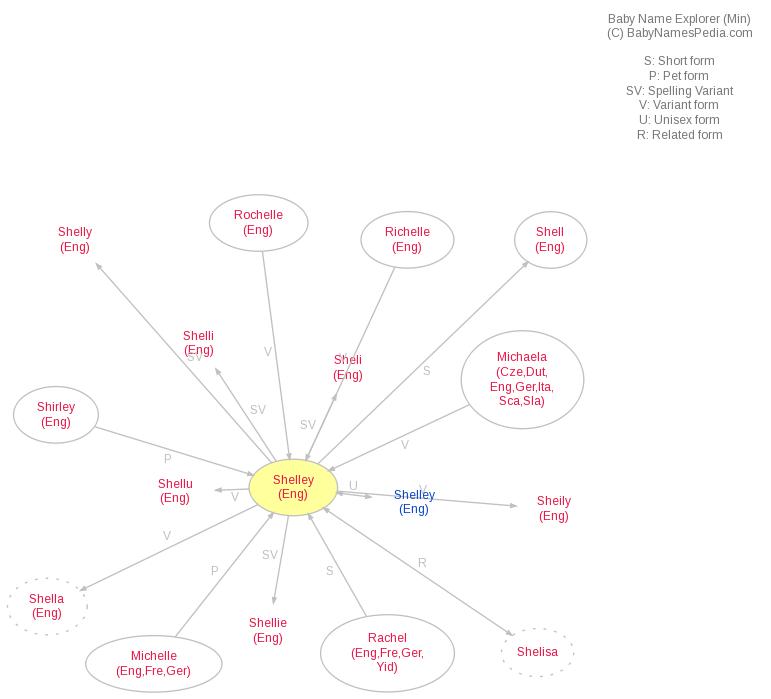