What does Siân mean?

[ 1 syll. si-&ac-ircn ] The baby girl name Siân is pronounced as -SHaeN †. Siân is used predominantly in the Welsh and English languages. Its origin is Hebrew. The name is the Celtic equivalent of Jeanne; in the Celtic language, 's' is the alphabet closest to 'j'. The name was first used in mid-20th-century Wales, and it has also since been used by English speakers elsewhere.

In addition, Siân is a variation (Welsh) of the name Jane (English).

Siân is also a variation (Welsh) of the name Jean (English and Scottish).

The origin and meaning of Siân is inherited by all variant forms.

Other variations of Siân include the diminutives Shani (Welsh) and Siani (Welsh).

Siân is rare as a baby girl name. It is not listed in the top 1000. Among the family of girl names directly linked to Siân, Jane was the most widely used in 2018. 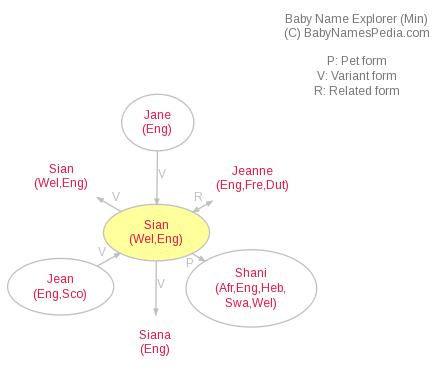