What does Sidney mean?

[ 2 syll. si-dney, sid-n-ey ] The baby boy name Sidney is also used, and more frequently so, as a girl name. Its pronunciation is SIHDNiy- †. Sidney is used chiefly in the English and French languages, and it is derived from Old English origins. The name's meaning is wide island, wide meadow. The first name is derived from the surname, which could be from a place name in Surrey, England, from the Old English 'sidan' and 'eg' (meaning river island, riverside meadow). The surname could also be derived from the Norman baronial title named after the place name of Saint-Denis in France. The family name was borne by influential persons including the English poet, courtier and soldier Sir Philip Sidney (1554-1586); in his case, the surname is from Surrey. Another noted bearer of the family name was political martyr Algernon Sidney (1622-1683), an opponent of the monarchy of King Charles II. The first name was adopted from the mid 19th century, and its adoption was later promoted by the appearance of the heroic character Sydney Carton in the Charles Dickens novel A Tale of Two Cities (1859).

Sidney has 20 variants that are used in English and other languages. Variants used in English include Cid, Cyd, Cydney, Si, Sidnea, Sidnee, Sidni, Sidnie, Sidny, Sidon, Sydne, Sydnea, Sydnee, Sydni, Sydnie, and Sydny. The short forms Sid and Syd, and the variant spelling Sydney are other English forms. A variant of Sidney in other languages is Sidonio (Spanish).

Sidney is uncommon as a baby name for boys. At the modest height of its usage in 1912, 0.222% of baby boys were given the name Sidney. It ranked at #80 then. The baby name has since fallen out of favor, and is today of very light use. Within the group of boy names directly linked to Sidney, Dennis was the most popular in 2018. Though Sidney is more popular as a girl name today, there was a period before 1992 that it was given more often to boys. From 1993 on, increasingly more girls than boys were named Sidney. In 2013, the name Sidney was given to 41% more girls than boys. 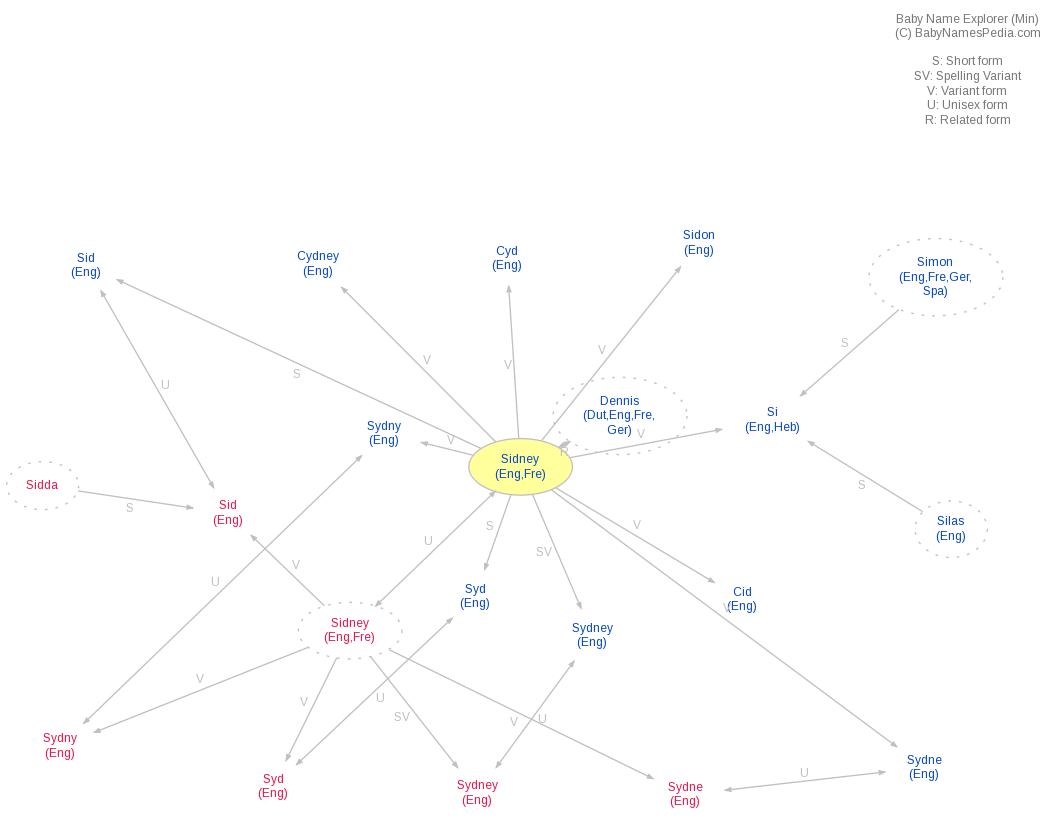