What does Siegbert mean?

[ syll. sieg-ber(t), si-egbe-rt ] The baby boy name Siegbert is pronounced as SIY-NGB-erT †. Siegbert is used predominantly in German and its origin is Germanic. A two-element name, it is derived from the elements 'sige' which means victory ; 'berht' bright, famous. The name was borne by several early French and Anglo-Saxon kings, notably the 7th century King Sigebert of East Anglia, also known as Saint Sigebert, who helped established Christianity in England. The name has been commonly used by Jews in recent times.

The name Sigisbert (German) is a variation of Siegbert.

Sigi (German pet form) is another variant of the name.

Siegbert is not popular as a baby name for boys. It is not listed within the top 1000 names.

Baby names that sound like Siegbert include the name Sigvard (Scandinavian) and the name Singefrid (English). 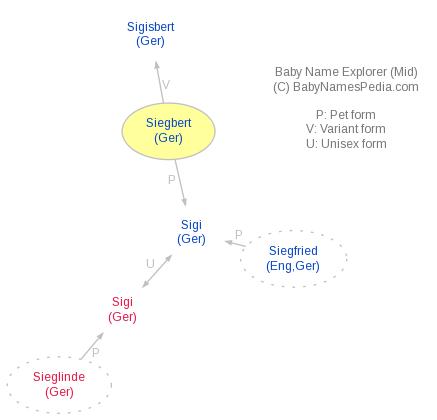