What does Siegmar mean?

[ syll. sie-gmar, si-egm-ar ] The baby boy name Siegmar is pronounced as SIY-GMaaR †. Siegmar is used chiefly in German and it is derived from Germanic origins. A two-element name, it is derived from the elements 'sige' which means victory ; 'meri' great, famous. Segimerus (Latinized) and Sigumari (Germanic) are old forms of the name. The name was borne by Segimerus (17BC-21AD), also known as Arminius, the Cherusci chief who defeated the Romans in the Battle of the Teutoburg Forest.

Siegmar is a seldom used baby name for boys. It is not listed within the top 1000 names. 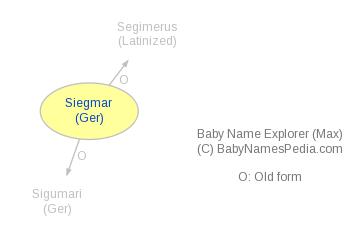